FANTASTIC BEASTS: THE CRIMES OF GRINDELWALD

I don't go to midnight movies anymore. My movie buddies of those days can't go with me and it doesn't feel safe to go alone like it did when all the Harry Potter movies were new. I actually found myself checking the time on Thursday night, however, and wondering if I could still g

et a ticket. But common sense prevailed; did I really want to go to the mall at midnight and come out alone at 3 am? No. I did decide that I could go on Friday afternoon after I finished volunteering at the Food Bank. If not for that, I would have gone earlier in the day. The theater wasn't completely full, but it was nice to see Fantastic Beasts: The Crimes of Grindelwald with an audience - sharing some laughter, some gasps, some clapping. That's part of the experience I've missed from the midnight movies (and midnight book launches).

This second movie reveals so much of the back story of Dumbledore, Newt and his brother, Theseus, Leta Lestrange, Nagini, Tina, Queenie, and Jacob and how their lives are intertwined and connected to Grindelwald. Some of the story we already knew from the Harry Potter books, but without the detail. Other parts of the story were a surprise and in some cases, a shock. I definitely wasn't prepared for the ending, and now I can't believe we have to wait for the third movie to see where this story will take us.

This second movie answers a few questions but raises many more, just as the second installment should do. To say more, before the story is common knowledge, might ruin it for others, so I'll leave it there. The cast, old and new, is perfect. I especially like Jude Law as Dumbledore. He manages to capture just how I imagine a younger Dumbledore would be. I was glad to see the nifflers again, as well as many new creatures, some were quite extraordinary, but well understood by Newt, of course.

I'm looking forward to reading the screen play and then seeing the movie again, this time with Laura. And then we can have a great discussion. Thank you, J. K. Rowling, for another wonderful story, one that touches all our emotions and imagination.

FANTASTIC BEASTS AND WHERE TO FIND THEM 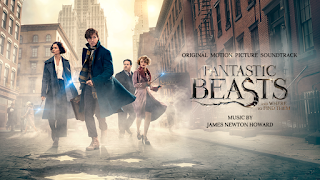 When this book first came out, I bought it and was entertained but didn't really pay much attention to it. Now we have one movie, an audio recording of the book (excellent), and the second movie coming up in November.

I loved this new look into the Wizarding World, pre-Harry. I also found it fascinating that it's set in the United States with a different view of the wizarding world, tied to the Salem witch hunts and all the hysteria that surrounded that time.

Since this was a movie without a book as a reference, it was easier to watch, take in the story and the characters without constantly comparing it to books I had read and re-read. Having more background and insight into Newt Scamander, coincidentally a Hufflepuff), makes Harry's text book even more interesting. And seeing some of the animals come to life that we had read about at Hogwarts was fun. But it is even better that we see characters/beasts that we hadn't seen and hadn't even known existed. The darker story of Credence and what happens when people like him suppress who they are has the obvious implications for the wizarding world, but also relates to those who are marginalized or suffer discrimination in any aspect of life. Leave it to J.K. Rowling to give us reasons to examine how we treat others, not just in a fictional setting but in real life.

With the movie coming out in November, we are to get a more complete picture of evil in the world, as well as the relationship between Newt Scamander and Albus Dumbledore. Can't wait. (And I love the casting for both movies.)

Email ThisBlogThis!Share to TwitterShare to FacebookShare to Pinterest
Labels: Fantastic Beast and Where to Find Them, movies, Potter, Rowling

HARRY POTTER AND THE CURSED CHILD - spoilers ahead

If you haven't seen the play in London, the only place you can currently see it, or you have not read the book/script, then you should go find something else to read. Don't say I didn't warn you.

I went to the midnight release at my favorite local Barnes and Noble, the same store where I bought my first Harry Potter books and the one where I bought all the remaining ones from Goblet of Fire through Deathly Hallows. When I bought that last book, I went alone. Everyone else had to work, so I was there with a lot of excited strangers. The store (and the parking lot) were full.

For the latest Harry Potter book, it was sort of the same; I went by myself, hung out in the cafe and waited till midnight. And there were people there, just not as many - maybe 100 or a little less. I didn't check in to get a place in line until about 10 pm, and I was number 17. So . . . not the same level of excitement.

My excitement wasn't really very high either, nor were my expectations. I did read a spoiler kind of review just the day before the release. I guess I wanted to keep myself from feeling a big let down. It's not something I did with any of the other books. I wanted to find out for myself, without the slant from someone else, what was in the new book.

I was home by 12:20 am, took time to get comfortable, fix a cup of tea and settle down on the sofa for an hour or so of reading. (I can't do the stay-up-all-night reading sessions anymore -- LOL.)

First of all, this is a play, and it is a script. They are just harder to read than a book. A play is meant to be watched, heard, experienced with people on a stage and you in the audience. So, it's always just a bit odd to read a play. But I found that that wasn't my biggest issue.

The characters are familiar; the setting is familiar (it starts with a revisiting to the epilogue from Deathly Hallows). That's a good way to start anyway. Harry and Draco's sons meet on the train and become fast friends. So far, that's kind of nice and interesting, even though it's clear Harry and Draco still don't like each other.

There are some complications with Amos Diggory, who clearly is still mourning the loss of his son. And then there is his niece, who from the beginning seems a bit off, though it's hard to see what. So far, that kind of misdirection is something in keeping with Rowling's writing. What is out of character is some of the dialogue. It just doesn't always fit or have the right feel. It's almost like the writers, who were not Rowling, are trying too hard. Sort of like the kind of writing in much of the fan fiction that has been out there for years.

Ah, finally, I have come to my biggest complaint about this new Harry Potter book. It reads and feels much more like fan fiction than like something that Rowling would write. I'm quite surprised that she agreed to it, actually.

The two sons, Albus and Scorpio go off on an adventure to fix the past with the use of a Time Turner by going back to change the outcome of the Triwizard Tournament in Goblet of Fire. The Time Turners weren't all destroyed after all in the Battle of Hogwarts. The use of the Time Turner in Prisoner of Azkaban was limited, even though it was used by Hermione throughout the book. We just weren't along for the adventure until she used it with Harry. But this new play makes extensive use and misuse of the Time Turner. It's too much, too contrived.

It also turns out that Harry can get as frustrated with a grumpy teenager as the rest of us. I wasn't too bothered by his lack of perfect parenting, though Harry in the play doesn't fit with the parent/Harry that we see at the end of Deathly Hallows. Of course, Albus was younger then.

I'm not going through scene by scene, too confusing, too repetitious, and I've only read through it once over a long weekend. I was glad that the story resolved the way it did in the end. There were some nice moments with all the characters. I'm sure that as a play it's much better than it was as a script with me reading to myself. From some of the stage directions, I'm curious how they pulled off the special effects; if they managed it, it would indeed be very impressive and probably accounts for the very good reviews from the audience.

Rowling said that after we read the play we would understand why it had to be a play and not a book. No, I don't. I don't know why this couldn't have been written as a book, but it would need to have been written by her, not someone else.

She has also said that this is the final Harry Potter story. I really hope she sticks by that. It should have ended with Deathly Hallows. The Epilogue, whether people like it or not (and I did), tied up enough of the loose ends about the main characters. We really didn't need anymore.

I'm glad I read it. I'm glad I have the book so I can re-read it at some time in the future. I will probably never see the play even if it comes to a theater near me, and that's a distinct possibility since I live close to Seattle. But the story is just not compelling enough that I want to spend a lot more time with it. I have read and re-read all the original Harry Potter books so many times I have lost count. Every time I read through one, I find something new or rediscover something I'd forgotten. This latest book/script, that Rowling embraced but didn't write, just didn't reach into my heart and soul the way the first seven did. Seven was, after all, such a magical number.

Washington, United States
As a reader of many things, I especially enjoy reading and discussing Harry Potter. I felt that I needed a place to organize my reflections on books that have given me many hours of enjoyment and opportunities for thoughtful conversations.